The Danish fast-food chain Sunset Boulevard extends their concept and introduces two new burgers on the menu.
With a wish to challenge the existing burger market and spoil the Danish consumers with a little extra, a completely new line of burgers have been introduced, offering burgers with high quality ingredients.
These new burgers contains high quality cheddar cheese supplied by Uhrenholt.
Sunset Boulevard is better known for its sandwiches, but in 2010 they expanded the fast food chain menu with three burgers, including “The Original Burger”. Last year this burger was declared a test winner of MetroXpress.
Sunset Boulevard is now introducing two additional burgers; the Herford Béarnaise Burger and the Double Burger. “We have already seen that the Danes have welcomed them”, says Kristian Scheef Madsen, CEO of Sunset Boulevard, which is encouraging news for Uhrenholt.
Similar agreements have already been established with other businesses within the international fast food industry, as Uhrenholt have strong collaborations with fast food chains like Pizza Hut and Domino’s in Asia. 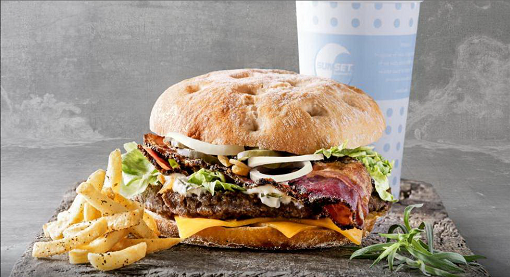